Two working parents, Brendan & Jules, already knew that the Au Pair program was the solution they needed for their 2-year-old son, Luca, who had a sensory processing disorder, which led to a speech delay and behavioral adjustments.

When speech therapy didn’t work, they decided they needed more consistency in Luca’s care. They set out to find an Au Pair with special needs experience.

But when they found Diana, from Ecuador, she showed them that a bond with a child can be more powerful than any special needs “tactics” she already knew.

They Didn’t Expect to Learn That “What You Really Get is a Lifelong Family Member and Some of the Most Incredible Memories.”

Luca’s behavior and development changed faster than Brendan and Jules could’ve anticipated. They were amazed at Diana’s ability to face Luca’s behavior with no fear. But they were completely blown away when Diana forever impacted the family’s happiness and well-being.

Read the full story to discover why they say Diana is now a “lifelong family member.”

Finding, interviewing, and connecting with someone thousands of miles, countries, even continents away can feel daunting and frightening. However, it’s the decision to put the hearts that walk outside of your body into the hands of a stranger that takes the most courage.

We are a family of six – two older boys, one younger daughter, and the youngest boy. Our youngest son, Luca, was born with a heart defect that required him to undergo open heart surgery at the age of 4 months. Some delays we expected – gross motor functions such as crawling, walking, etc. But we never anticipated a sensory processing disorder (SPD), and speech delay. Luca’s diagnosis of SPD was recent, so before it had a name our life and our child were very confusing to us as parents and his siblings. Since Luca did not speak, most of his communication was high pitch screaming and incessant crying.

“Doing things such as going to the movies, having dinner in a restaurant, and visiting public places of any sort were very hard and would cause Luca to have those uncontrollable screaming and crying episodes. Some days were easier than others, but the hard days were extremely testing of not only our strength as a family, but the strength of my and my husband’s marriage.”

From around 3 months until 2 years of age, Luca was primarily taken care of by a sitter who would watch him in our home. We started to incorporate speech therapy around that time, and for months we did not see a change in his behavior or speech. In November of 2018, our Au Pair, Diana joined our family. Before we matched, I noticed that Diana had experience working with children with developmental delays, autism, ADHD, etc. She also has a background as a teacher who worked with young children, which is a profession we find to be very noble, so immediately I knew that we needed to connect and get to know her.

“When Diana arrived and I first met her, I knew she was family.” 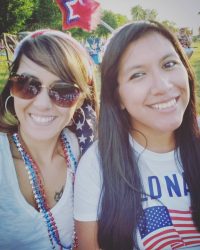 She was warm, sweet, and her English a lot better than she admitted (and would still like to admit). The first few days were spent getting to know her, and her getting to know all of us. Luca presented his usual challenges, but within a week Diana was able to form an incredible, safe, and loving bond with him and the other 3 children.

Days with Luca were spent playing, and coloring. Learning letters and numbers, even though he couldn’t talk, he could still tell you where the letters were in the alphabet if you asked, or where the “green block” was in his Lego bin. Diana was always great about introducing new foods to him, and she was never afraid to try and take him out to the park, or on play dates.

“A few months into her stay in 2019, we experienced the most amazing changes in Luca. He seemed happier. He started to eat more new foods. In the summer, we were totally blown away. Luca started TALKING.”

He began trusting people and felt more comfortable in more public places. Places we’d never be able to go to in the past. This in turn helped our family bond grow and become so much stronger!

I think when you sign up to be a host parent, you have the expectations of exceptional child care, a helping hand, and someone to bring culture and life from a foreign country into your home. But what you really get is a lifelong family member and some of the most incredible memories your children will always have. In our case – we were given the ultimate gift of closeness, an indestructible bond, patience, love, and faith that our youngest child can and will overcome a diagnosis.

“When you invest in an au pair, you invest in your children. Having children ages 3 to 14, we have experienced multiple child care services (daycares, private schools, nursery school, babysitters, etc.) and invested thousands of dollars. You can’t put a price on what we have gotten out of this program.”

Diana has given us so much, we will never be able to thank her enough. The process of finding an au pair can be scary sometimes, but in life there are little rewards without risk. Thank you Go AuPair for connecting us to someone we never had any idea would be so impactful in our lives.