How to Get Kids to Do Chores (with Dad!)

Wondering how to get kids to do chores? Even on a good day, it can be a challenge. But imagine if kids wanted to do chores.

This is where Dad comes in. When dads step in to do chores with the kids, they often bring a silly vibe that makes chores fun for kids. 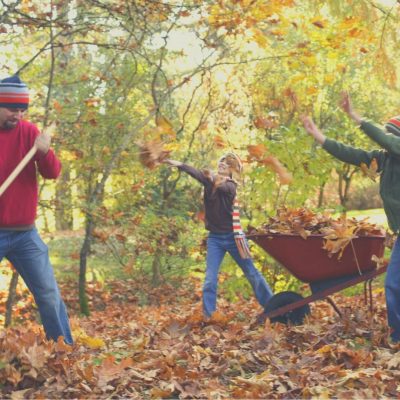 It can also be fun for kids to do chores with someone new. So, it’s a great idea for Au Pairs to apply these strategies and encourage kids to clean up throughout the day, too. (Unlike many other childcare options, Au Pairs can save parents from pulling their hair out over how to get kids to do chores!)

Dads & Male Au Pairs: How to Get Kids to Do Chores & Have Fun!

It’s important for kids to learn to clean up after themselves and do basic household chores. The internet runs rampant with reports of millennials who can’t do so much as sew a button (though the accuracy of such reports is to be questioned).

Still, most parents want their children to be equipped to take care of themselves as adults. And most Au Pairs want to help them get there. 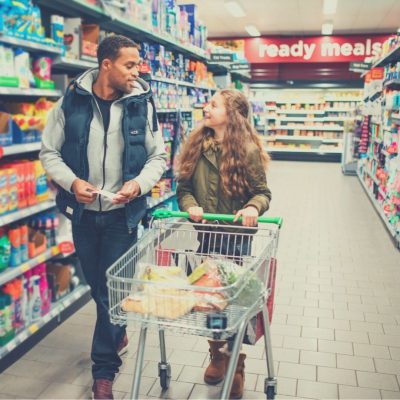 Chores are only one aspect of taking care of yourself, but they’re an important one. Not only do chores teach kids responsibility and proactivity, but they also build a lifelong habit and teach children to work through frustration.

Benefits of a Male Influence When It Comes to Chores

When kids do chores with a male role model, amazing things happen. Even though chores are often menial, boring tasks, doing them together provides a unique bonding opportunity. 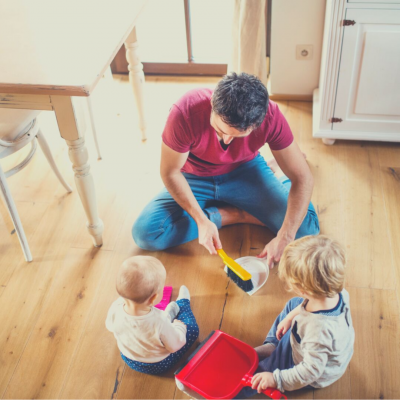 It’s no secret that moms often take on the bulk of household work and the mental burden of managing a home. I don’t know about you, but in my family, the bulk of the housework is child-related. So, when dads take charge of getting the kids to clean up after themselves, they relieve a huge burden for their spouses.

Plus, they’ll be raising their kids to be responsible for themselves, no matter what society labels as a gender role.

Likewise, when an Au Pair enforces chores and keeping the house tidy, it relieves a huge burden for the Host Parents.

There are many reasons kids don’t do chores. Don’t let these common reasons stand in the way of your children building lasting, lifelong habits.

Instead of wondering how to get kids to do chores, parents can focus on spending quality time together (that just so happens to get the house clean, too). 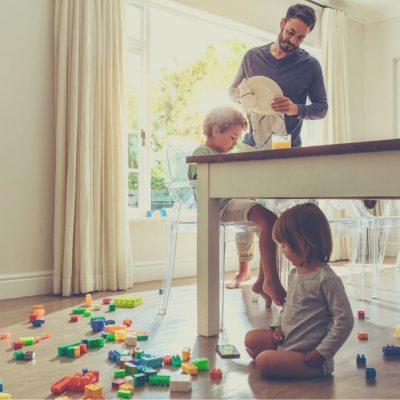 And keep in mind, it’s important to keep age-appropriate expectations and chore assignments. Most toddlers can’t be expected to finish every chore, and their chores will be much simpler than an older sibling’s.

Even adults don’t like chores. So, if you’ve been wondering how to get kids to do chores, remember that your kids might not like them, either.

When you don’t like to do something, it’s easy to procrastinate. However, if you allow your kids to procrastinate chores now, they’ll have an even more difficult time finishing them as adults. 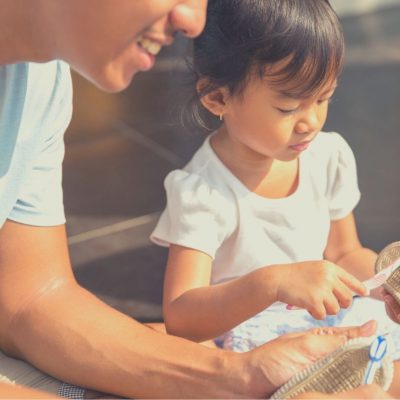 Instead, make chores into a game so they seem less tedious. Be honest and funny about your own feelings on chores. For example, you might say something like, “I don’t like doing laundry, either. But imagine if we didn’t wash our clothes. We’d have nothing to wear. And the laundry pile would come alive and take over our house!”

A silly statement like this creates an opportunity for imaginary play. Dad can become the “laundry monster,” and the kids have to try to stop him (by washing the laundry).

2. It’s faster for the parents to do it

Kids are still learning how to do chores. Often, it can be frustrating for parents to watch and wait on their kids. And most of the time, it’s faster for the parents to take over and finish the chore themselves.

When there isn’t much time to do the chores, it’s understandable if this happens to you. But before taking over your kids’ responsibilities, ask yourself how urgent it is. If you can take a step back and let them finish, no matter how long it takes, you will be giving your kids a valuable learning opportunity. 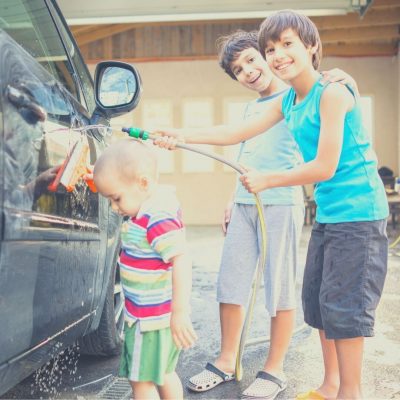 And an important life lesson: Adults aren’t going to do it for them just because it’s hard.

When children struggle to maintain a sense of urgency when it comes to chores, male Au Pairs can turn the chore into a race. The kids’ toy box can become the “clean up train.” Push the “train” around the room. At each stop, the kids have to rush to pile the toys into the box before it moves on to its next stop.

Your idea of cleanliness (and need for it) probably doesn’t match your child’s. Not only is your child still learning how to clean, but they’re also learning to rise to your expectations of cleanliness. It’s more important that they learn to do the chore than it is to have it done perfectly. 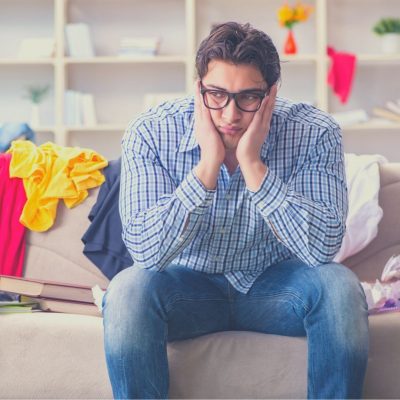 Be patient when your kids leave chores unfinished. Ask yourself: Did they do the chore? Are they improving steadily over time? Fighting, nagging, and yelling, over the task is likely to turn them off to chores completely. In some cases, it’s best to let it go.

4. It’s easy to get frustrated & give up

Adults get frustrated with chores, so why wouldn’t kids? Children are still learning to deal with big emotions, and sometimes the frustration is just too much (for the parents too!).

When kids get frustrated, they might throw a tantrum or argue bitterly about doing chores. Remind your kids that they get better at their chores every day. Instead of worrying over how to get kids to do chores, focus on how responsible they are. Point out how proud you are that they contribute to the household. 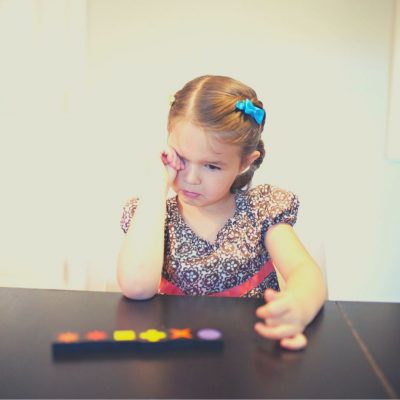 This can be a valuable moment for an Au Pair to sit down and have a chat about frustration with the kid(s). Or, for little kids, use the child’s favorite toy to act out a frustrating scenario and talk about how it feels, and how to move past it.

5. Parents tire of the daily fight

When it becomes a fight to get the kids to do chores, it can be draining. If you feel you don’t have the energy to fight all the time, you’re not alone. Many parents would rather do the chore themselves than fight with their kids every day (or several times a day).

If you find yourself fighting with the kids, take a step back. Ask yourself what your child is really saying. Why are they resisting doing chores? Could your attitude be contributing to their resistance? (As we all know, kids love to do the opposite of what their parents want). 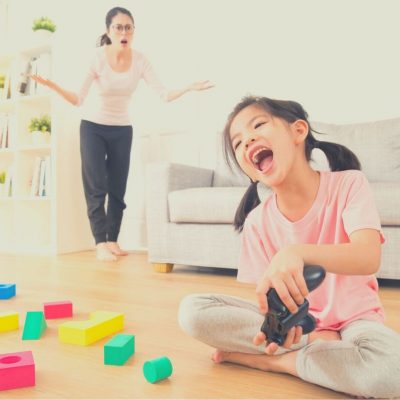 Kids love to wrestle with their dads. Roughhousing can be a great way to blow of steam. Once the kids are tired, you can take a moment to have an honest conversation with them about chores. Chances are, they’ll be more willing to do chores after receiving Dad’s attention and some valuable playtime.

What Other Tips Do You Have?

Male Au Pairs and dads can be a fantastic help when it comes to getting kids to do chores. Often, male role models are able to bring a fun, positive vibe to chore time that encourages kids to be more involved.

Now that you have some of the best tips on how to get kids to do chores–whether you’re a Dad, a male Au Pair, or any other male role model– you can try it out at home! You can even use this free printable chore chart to set up a reward system for your kids! 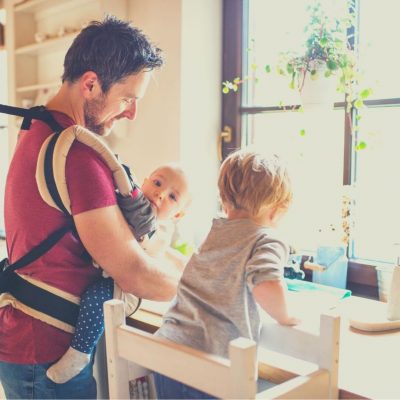