Living in America gives Au Pairs freedom and, according to the Au Pairs, changes their lives for the better.

Au Pairs from all over the world say there’s a new sense of freedom living in the USA. Here, they’ve adopted a new mentality they never knew existed before: that in America, people are free to achieve their dreams.

Imagine realizing, for the first time in your life, that the American Dream is possible for you, too.

Au Pairs Learn to “Push” Themselves To Try New Things

The Au Pair program is a unique cultural exchange experience. This J-1 visa program allows international young adults come to the U.S., where they’re able to live with an American Host Family for up to two years. Au Pairs provide childcare to the Host Family in exchange for housing, food, tuition money, a weekly stipend, and the chance to travel and experience a new culture.

Not only do we hear that living in America gives Au Pairs freedom, but many Au Pairs say they adopt a new, “American” mentality. It’s hard not to look at life differently because of their time here. 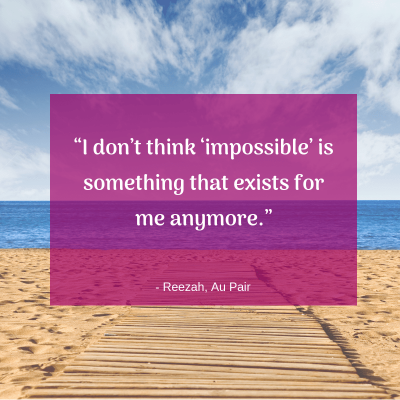 Reezah has been living with his Host Family in Oregon since May 2018, and he’s already seen a shift in his own mindset. In an interview with the Au Pair Sis, he says he came to the U.S. to “challenge myself… to push myself to do things that I never thought I would have.”

Like many Au Pairs, Reezah says his goals also included traveling, obtaining a driver’s license, and for his Host Family to be pleased with his work. In a few short months, he’s already accomplished each of these goals. It was important to him to be acknowledged for a job well-done, but his Host Family has gone above and beyond his expectations.

“Right away they made me feel at home and taken care of. They had my back in every possible way.”

But, more than these interactions with his Host Family, Reezah’s life has evolved in ways he hadn’t anticipated.

“A new way of going forward”

“I don’t think ‘impossible’ is something that exists for me anymore.” Reezah says he will carry this new mentality with him for the rest of his life. “100%, there is no way I would’ve adopted a new way of going forward in life if it wasn’t for the Au Pair program.”

This is just one example of the many ways America gives Au Pairs freedom. After spending just a few months in the U.S., Au Pairs say they feel equipped to go after their dreams.

When asked if this new drive will follow him home, Reezah says, “Oh, absolutely.”

Reezah attributes a large part of his personal development to his Host Family. As he says, they gave “a small-town South African boy” a once-in-a-lifetime opportunity. But more than that, they welcomed him into their home and their hearts.

“It means so much to me, because I came here as a stranger [and] they helped me get on my feet and be comfortable with the environment.”

Many Au Pairs credit their Host Families, and their in the program, with improved prospects for the future. 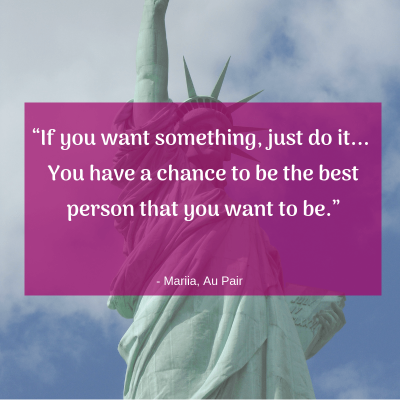 In a similar way, Mariia, from Ukraine, says the Au Pair program has changed her perspective on life. Her experience is just another example of how America gives Au Pairs freedom and a sense of how the American dream is available to anyone.

She says her life has been divided into “Before U.S.” and “after U.S.” Her “two huge reasons” for becoming an Au Pair were “to travel and to work with kids,” and after fourteen months with the same family in California, she says it’s been a great chance to combine travel, study, and working with children.

While in the U.S., Mariia says her Host Parents have been patient and supportive. They include her in family activities, and even asked her opinion on how to paint the interior of their home.

Additionally, Mariia’s hosts have contributed to her cultural experience. For her, this included learning about local bike trails, and what Venhrin calls “cultural biking.” She has enjoyed exploring the outdoors and experiencing a healthier lifestyle with the help of her Host Parents, Natalia and Max.

“It’s really cool to live in such [a] good family, cause you understand that you are part of the family, you aren’t just an Au Pair, or nanny, or worker.”

“You cannot buy it, you cannot rent it.”

Participating in U.S. culture has been eye-opening to Mariia. She says everything is different—people, food, roads, societal expectations, and even the American perspective on life—and that living here has given her the opportunity to gain a firsthand understanding of everything from daily habits to politics.

“If you want something, just do it… [Here], you have a chance to be the best person that you want to be.”

For Mariia, it’s not just about the American dream. She says Americans value “every minute” they have, and that has influenced the way she sees life. Even her Host Kids know “you can’t waste your time.”

This has inspired her to live her life differently. “It’s [a] good lesson for my future,” says Venhrin. She explains that in Ukraine, desire alone isn’t always enough to change the course of your life, and that the chance to live, work, and study in the U.S. is a once-in-a-lifetime opportunity. “You have restrictions, you know? You don’t feel free.”

As a result, her perspective on the U.S. might surprise some people. She says, “Here, I see that [the] government and people care about [other] people… This was my first impression.”

Venhrin encourages other young adults to join the Au Pair program. “You cannot buy it, you cannot rent it,” she says of her experience.

Ingrid, from Colombia, has been in the U.S. for one year. She joined the program to develop her life skills and become adept at adulthood. Her experience highlights how American gives Au Pairs freedom and the ability to expand their skill set in ways they typically wouldn’t at home.

Ingrid loves baking, but she says that baking is different in American than it is at home. (Plus, baking isn’t the same as cooking dinner for children and yourself).

She says her time in the program proved to be vital has to becoming self-sufficient in the kitchen and calls her Au Pair year “the most educative, self-learning, inspirational and amazing year of my life.”

“One of my goals in life was learning how to cook and survive in the attempt.” After her first attempt at baking ended in a burned cookie tragedy, Ingrid said her Host Mom, Stephanie, helped her focus on improving her cooking abilities.

Stephanie was able to assist her in the kitchen and pass on what Ingrid calls “great” cooking skills.

“She always supports me and I always ask for her opinion to get better every time.”

They have worked on various baking projects together, with Stephanie supervising and offering suggestions for improvement the next time around. The time spent together in the kitchen provided them the unexpected opportunity to practice Spanish together. 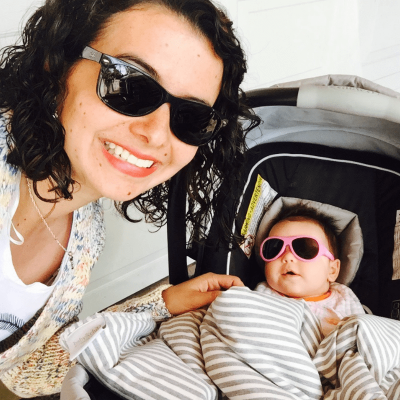 Ingrid’s experience in the Au Pair program has taught her more than just how to cook, however. She stresses the importance of her Host Family’s support, saying that the entire family has taught her new things.

“My host dad has thought me a bunch of things… but mostly how to be a really good dad.”

This truly embodies the heart of the program, which all comes back to family and relationships. The Host Kids have contributed to Ingrid’s learning, too.

Spending a year in the U.S. has changed Ingrid’s perspective, showing her how America gives Au Pairs freedom and a new sense of self.

“I cannot even say how many things I have learned, how many places I have visited and how many times I have to feel completely and endlessly happy. Not even in my wildest dreams I imagine living 10% of the things I’ve lived in this past year and for this, I’m deeply and eternally thankful with my Host family.”

The American Dream seems to instill itself in a person’s mind after they’ve spent enough time in the U.S. Ingrid says this is the case for her, too.

“Now I know that dreams come true and me being here is proof of that.”

Think Hosting an Au Pair is Right For You? Explore your options now!