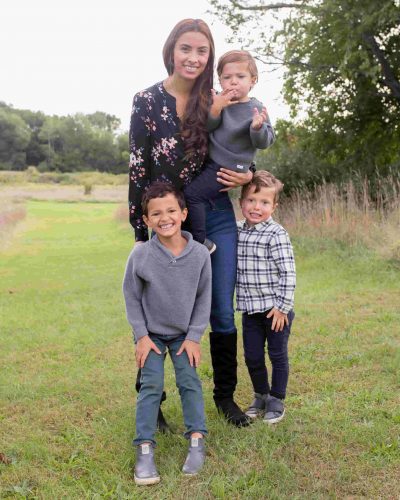 In the fall of 2016, our 3rd child- Graham Michael Rosenthal was born. Graham was our 3rd boy. I could not believe he was our third boy. Graham’s older brothers, Drew (4 years at the time) and Bennett (2 years at the time), were already the most active, busy, demanding, crazy fun boys. Adding another boy to the wrestling, obstacle course, playdoh loving crew, was a daunting thought.

Weeks later, it may seem like our family would be filled with fun and joy, but in fact it became the opposite. My husband, Jonathan began a new job, and the travel was extremely demanding. He was gone 4-5 days a week. Also, 10 days after Graham was born we moved into a new house. Finding myself trying to unpack a family of 5, juggle 2 toddlers with a newborn who was nursing around the clock, and maintain my part-time job as a speech-language pathologist, I was in over my head.

Not to mention, our 4-year old Drew was having a very hard time with the new baby/new house transition, and was tantruming and having breakdowns several times a week. The days were tough. I would count down the hours until the night, and then when the night would finally come I was awoken several times with the baby and/or the other kids. I was not enjoying motherhood as I thought I would be. But I so wanted to enjoy it, as everyone reminds a new mom “These days will go by so quickly, so enjoy them”, but to me that was easier said than done.

Our old neighbors had an Au Pair, and encouraged us to get one as well (Maybe they saw how overwhelmed I was despite trying to always appear as if everything was okay!). I was very hesitant as I wasn’t sure if I wanted to add another person into our already crazy household. But, I knew something had to give.

With some encouragement from my husband, we initiated the process and had Eric and Theresa (who oversee the Au Pairs in our area) come to meet us. Then we began Skyping potential Au Pairs, and that is when we first spoke to/saw Julieth (pronounced “Juliet”). Her full name was Julieth Patricia Angel Ruiz.

The “Angel” part stood out to me.  She was sweet and kind when we spoke. She had a psychology degree and experience with kids with autism, I knew she must be very patient – just what was needed to work with 3 rambunctious boys!

After Skyping 3-4 more times, I knew Julieth was the one for us! We offered her the position, and she accepted. Julieth arrived in June of 2017. We all picked her up from the airport and the boys were anxious to meet the new “member of our family” who would help take care of them. We gave Julieth some time to ease into our family, but before I knew it, she was comfortable with us, and had even made friends with other girls from Go Au Pair.

One evening she was with the boys outside on the swing set while I was making dinner (something I always loved doing but had stopped for quite some time). I remember standing in the kitchen with my husband, watching her play with them. They were smiling and laughing, and so was she.

They were having FUN! So much fun! This was my AHA moment. I looked around, and realized we were enjoying life again.

Having her join our family was the best decision we made.

Julieth came in, and brought fun and laughter back into our house. The fun that I wanted to have as a mom, but mentally and physically could not get there at the time. Julieth has been the biggest blessing to our family. She is shy (but outgoing with the kids!), polite, kind, playful, funny, and warm. The boys absolutely adore her. They call her “Ett” (Short for the ending of Julieth, started by Graham since he could not say her whole name).

Ett has done more than given me relief from the work having 3 boys entails.

She helped bring happiness back into our house. She does everything with ease, and has the patience of a saint. Finally, 1½ years after she came (She extended in June 2017), we have the feeling of family again. I have the energy and desire to have fun with the kids again. Jonathan still travels 4 days a week, but knowing she is with us is so comforting, and has made life so much more doable. Everyone who meets Julieth tells us we are so lucky to have her- and we certainly know it! She truly has been our angel.