The Importance of the Weekly Meeting

So apparently, having a weekly meeting with your Au Pair is a thing.

When I heard we as a Host Family were supposed to conduct a weekly (informal) meeting with our Au Pair, I thought to myself, “This must be meant for other families who don’t have a good relationship with their Au Pairs… not for us.”

Some things we were “supposed to do” I brushed off, and other things I took more seriously. But, I have come to realize that weekly meetings are important, even if I don’t always see the need. 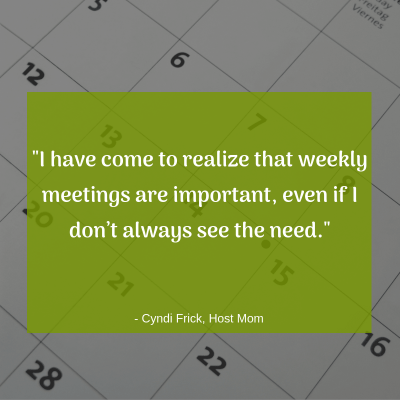 When both parties attended our very first weekly meeting, we both had notepads with notes, and the tone was a little awkward because I know I was wondering, “What issues does she have with us or her duties or schedule?”

I hate confrontation and awkward situations so I kept trying to sneak a peek at her list before the meeting started.

Her talking points were actually about the six educational credits and the vacations she was planning; there were no negative comments to be made or requests to change her schedule.

My list consisted of little OCD things I noticed she needed to work on so that I could be comfortable in knowing she was doing things how I liked them done… All things that needed time to get adjusted to.

The second meeting was blown off because neither of us had anything to talk about.

Issues that had come up were discussed in the moment, and that left nothing left to talk about. However, when the third week rolled around, we again thought there was a need for the actual meeting because my husband had brought up an issue that we needed to talk out with our Au Pair. Our three-year-old had gone through several phases when our Au Pair arrived. The first week, she was his best friend. The second week, he had gotten used to her and wasn’t attached to her at the hip.

We needed the weekly meetings to help our Au Pair with discipline. 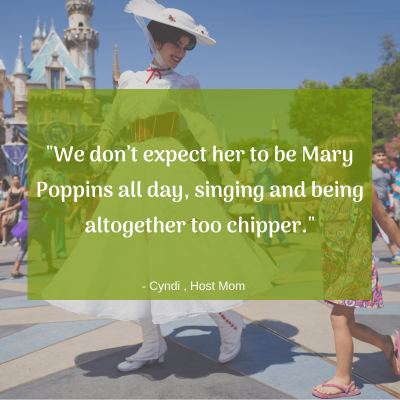 The third week, however, he started testing how far he could push her, and we noticed that it was creating some awkward situations.

At the meeting, we acknowledged there may need to be new rules instated with our oldest about respecting her and giving her the authority to make the call on naughty chair timeouts. Our son would be allowed a certain number of timeouts each day before harsher punishment would be enforced by the parents.

Our Au Pair needed to know we were aware he was getting on her nerves and if she was about to freak out, she needed to walk away from the situation or come to find one of us.

Obviously, every parent who has spent a day with their own young children knows how hard it can be. So, we wanted her to know we don’t expect her to be Mary Poppins all day, singing and being altogether too chipper regardless of the situation. Giving her the power to punish and helping her when she needed reinforcements helped to solve the issue of her being treated poorly by our son, and he has been much nicer to her since. Toddlers need boundaries, this we all know.

About the Author: Cyndi Frick

Cyndi M. Frick, COO at Paris Honoré, is a very busy mother of two amazing little boys. If not for the flexible help that her Au Pairs afford her, she would not be able to successfully run multiple businesses at a time. Follow along with this real-life Host Mom on through the ups and downs of her Au Pair journey.