How My Host Family Made My Dreams Come True

Since I was very young I always wanted to make music or live on art. When I was 5,6 years old, I sang in my grandma’s church whenever I could, until one day my mom bought a toy microphone and a speaker so I could play singing. In 2006 it was released `High School Musical` and I fell in love with this movie. I watched it thousands of times alone or with friends, I know all the songs and all the choreographies.

In August 2007 it was released High School Musical 2, and I love it. But in this movie, something different happened! At one point in the movie, Ryan Evans tells one of his friends that he is thinking about going to college and become a cameraman.

It was a trigger for me and made me realize that my dream would still be possible. That dream of traveling to the USA and trying something big, whether in Hollywood or NYC. Then I began to look for various ways to enter to the world of cinema or the arts, and the only possible way would be to take drama classes.

And that’s what I did, I did 2 and a half years of theater in Brazil, which was wonderful, but my dream was always to go to the USA and try something there. I worked a lot in Brazil saving money to go abroad, but it was always something that seemed impossible, either by visa or for lack of money.

Until a friend told me about working on cruise ships. I researched a lot and got to be accepted. My first month on the ship, I met a boy named Maicon, who became a lifelong friend. I told him my big dream and he told me that he always wanted to do the Au Pair program.

I had no idea what an Au Pair was and he explained everything about the program and about the “GX Intercambio” (Go Au Pair in the USA). I thought it would be great for me to be able to do something I like, that is to take care of children and at the same time to be in my favorite place on the planet.

Then it came into my head and I promised myself that as soon as I finished my contract on the ship, I would do this program. Finishing the contract, I went home and started my process for the Au Pair. The problem is that it is a very long process, and as I helped my mother with the house rent, my money was running out, so I had to go back for another contract on the ship and wait a little longer for the au pair program.

My first month on the 2nd ship contract, I went online at the au pair agency. And in my 4th month, my beloved family entered my profile. I still remember I was at the Crew Bar on the ship resting when I received that email. It was inexplicable. A few days later, we arranged to have our Skype interview, and as I would have some free time at the port of Punta Del Este in Uruguay, I decided to do my interview at a restaurant there. The problem is that the only open place was McDonald’s, so it would be right there.

The family was very friendly, they explained to me that I would take care of newborn twins, and I said I had never taken care of newborns, but I was very willing to learn. The chemistry was huge and the match was right. 1 week later, they emailed me saying that they were very happy to have talked to me and that they would like to have the match. I swear that was one of the best times of my life, I have no words to explain what I was feeling.

“No money can buy the moments I’ve had living here.” 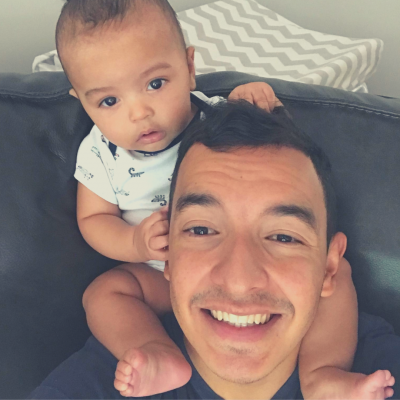 A few days later I ordered my sign off the ship and went home to get the travel and
visa documentation. After 1 month, I was embarking on my dream.

Arriving in the USA was amazing, being able to see everything I saw only in the movies. The family was very affectionate with me since the first day, the grandmother of the babies spent 1 week with me teaching me and showing me how each procedure was. Since I live in Maryland, and NYC has always been a goal for me, I planned a trip there, and 1 month before my birthday, my family gave me my gift, and this gift was a ticket to Wicked, a Broadway show. My hosts don’t really like hugging and kissing, but at that moment I had to give my host mom a very tight hug.

My babies are 17 months old, and both they and I have learned a lot from each other. They know my name, they say a lot of things in Portuguese, and they love me more and more, and I love them so much. I don’t know what it will be like when I have to leave. And I think my “AHA” moment is not just a moment, it’s a lifetime since I was very young I have this dream, and my family is already part of it. I met my 2 favorite places on the planet because of them. I just wish the universe would repay all that they did for me because no money can by the moments I’ve had living here.