It was just an ordinary day when one Au Pair saved her Host Granddad’s life by calling 911 at the right time. 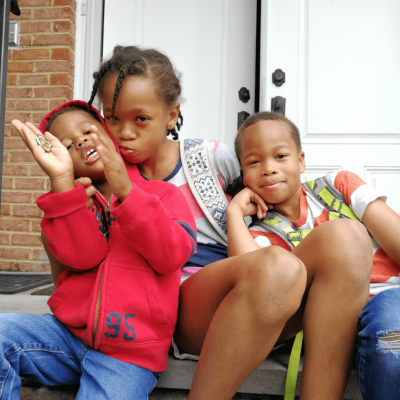 The Johnson Family has a unique Au Pair situation. They also play host to the kids’ Granddad. Runsi’s Host Mom, Dominique, says this was part of the reason they liked the idea of hosting an Au Pair from China. In Runsi’s home country of China, it’s common to find multiple generations in one household.

“I think because of the Chinese culture, [they] have a lot of respect for the elderly,” Dominique explains. “That’s been the case with all our Au Pairs, they’ve all been from China and they’ve all had a good relationship with our in-laws.”

As a result of her Host Family’s living arrangements, Runsi says part of her Au Pair experience meant bonding with her Host Granddad, too. Because the Host Granddad is retired, he’s often around the house when the kids are at school and Dominique and her husband, Lee, are at work.

“He is such a nice person,” Runsi says. “Age gives him so much wisdom, and if I have a question… I can always ask him and he will have an answer for me.”

Never during all the spent time growing to know one another did Runsi think that one day, she’d be able to say she saved her Host Granddad’s life by calling 911. 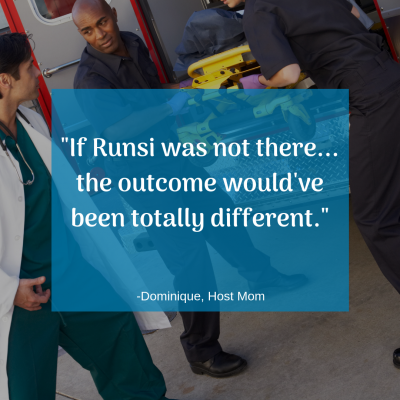 Runsi says she often drops in to say ‘hello’ to her Host Granddad during her spare time. But one day, when she stopped by, she noticed troubling symptoms.

“That day, I went to say hi to him, but he didn’t act normal. He can’t speak clearly, so I think, ‘Something is wrong.'”

Runsi knew she had to act fast. She immediately called her Host Mom.

Dominique confirmed Runsi’s suspicion and agreed that she should call 911 right away.

“After around 10 minutes, the emergency department, they sent help,” Runsi remembers. “The doctor asked my Host Granddad some questions and they think [he] might have a stroke. And they drove him to the hospital.”

Runsi didn’t have much prior medical training. In fact, she said in the urgency of the moment, she didn’t immediately recognize the symptoms were that of a stroke.

“I had some First Aid training. But when the ambulance came, when they are talking about a stroke, I realize it’s a stroke.”

Dominique says she and her family are grateful for Runsi’s attention and quick action. She calls the entire situation “fortuitous,” saying that their previous Au Pair spent all her time off away from the home, exploring the city and meeting up with friends. If the stroke had happened earlier this year, they might not have known until it was too late.

“If Runsi was not there, nobody would have noticed for many hours, and the outcome would’ve been totally different.”

At the time of the stroke, Dominique was an hour away from home, chaperoning a field trip. She says Runsi was level-headed on the phone and calmly conveyed all the symptoms to her.

“He was able to get treatment right away. And because they were able to treat it early, he doesn’t have any deficits… So that was, you know, miraculous for us.”

Runsi’s Host Granddad expressed deep gratitude, even going so far as to tell Runsi that he owes her his life. But Runsi didn’t do it for attention. She was just happy that her Host Granddad was able to make a full recovery.

Now, after experiencing an emergency situation firsthand, Runsi says it’s given her peace of mind to know how she reacts in an emergency.

For Au Pairs currently in the program, Runsi stresses the importance of reacting quickly in these types of situations.

“I think it’s really important to do the quick response when something is wrong… I recommend the Au Pair can get some First Aid training like CPR so you know how to save the person. Also, it’s important you contact with your Host Parents. If you can’t contact with them, then just call 911.”